The biggest enemy Spain had to face in the 17th century was France.

Count- Duke of Olivares was King Philip IV’s favorite man. The Count Duke was a man with frightful illusions of grandeur. He was both the most efficient and the ineptest administrator Spain has ever had. He held absolute power on several issues – foreign policy, economy – as the King wouldn’t sign anything the Count Duke of Olivares hadn’t read first. In fact, the King was kind of relieved that at least somebody was making decisions. 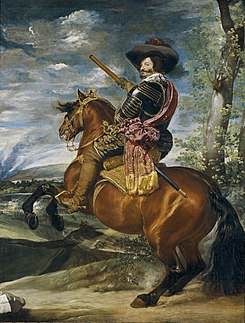 So while Spain could have perfectly avoided the endless decades of conflict against the Dutch, the Count Duke of Olivares and King Philip IV decided to pursue their victory. In 1621, after losing of hundreds of men and hundreds of ducats (the currency of the time), they were immersed in a 12-year truce that could have well been the end of the conflict. But as soon as Spain regained some military muscle, the Count Duke of Olivares decided to attack again and sent his troops to Dutch soil.

Involved in the Thirty Years War, Spain seemed to have a certain advantage – they had defeated a Swedish Army in Nordlingen.

Anyone who could pose a threat to the Spanish was a friend of French – and the Dutch were a fantastic candidate. They were geographically close, ideologically similar and needed all the help they could get. For years they had been sending money to Spain’s opponents and now was the time to claim back the investment by acting on the war on their own accord. They trapped in the Spanish forces in the Southern Netherlands by cutting the road that carried supplies for the the troops.

Then they sprang to action and defeated the Spaniards in the battle of Rocroi. They excluded Spain from the peace negotiations when the Treaty of Westphalia was negotiated, and secured themselves a bunch of territories, including Alsace).

Not that this peace treaty put at end to France’s belligerence. The French diplomacy was still bent on fighting a very weakened Spain, and, despite inner opposition from the very French nobility, it appeared to be a relatively prosperous investment. They won Arras in 1654, Dunkirk in 1658, and Artois and Roussillon in the ensuing Peace of the Pyrenees.

In the end, the two kingdom’s historical enmity was brought to an end by a marriage contract between French king Louis XIV and Spain’s Philip IV‘s daughter, Marie Therese). Wars should be resolved like that more often.

The loss of so many territories and resources meant that Spain had given up on being a Great World Power.