The Thirty Years’ War was a series of conflicts that began early in the 17th century in the Holy Roman Empire and finally involved much of Europe. It started as a conflict between Protestants and Roman Catholics but soon became a struggle for political power. 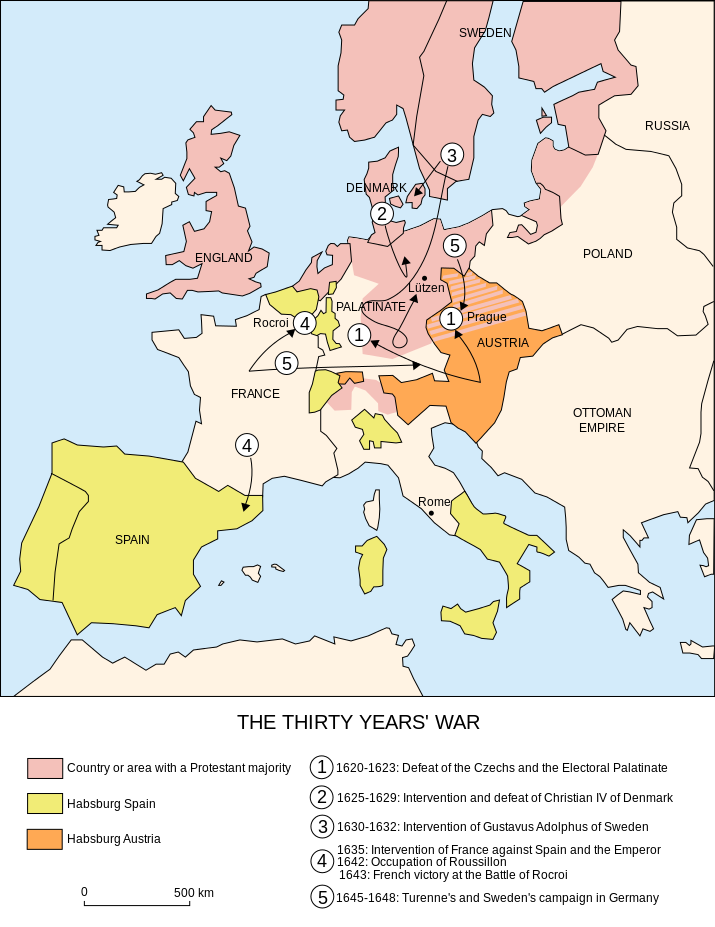 The war began in Bohemia. There in 1618 the Protestant nobility refused to recognize Ferdinand II, soon to be Holy Roman emperor, as their king. Instead they chose Frederick V, the Palatine elector. This brought on a war involving the member states of the Holy Roman Empire.

German and Spanish forces under the count of Tilly defeated the Bohemians in 1620 at White Mountain. Bohemia became an Austrian crown land, and Ferdinand was crowned king. At this point Ferdinand could have made peace, but he insisted that Protestantism be wiped out. This attitude aroused the Protestant rulers of England, Holland, and Denmark. They sent an invading army under King Christian of Denmark.

Between 1625 and 1629 the Danish army suffered a series of losses and was finally driven out of Germany. The deciding factor in the defeat was a force of mercenaries under a brilliant new general, Albrecht von Wallenstein. His men roved the country, robbing farms and torturing people. In 1630 complaints forced Ferdinand to dismiss Wallenstein.

Neutral Protestant rulers were aroused to join the battle when Ferdinand signed the Edict of Restitution. This document forced all Protestants to give up any Catholic property acquired since 1555. Gustavus Adolphus of Sweden invaded Germany in 1630. He arrived too late to prevent the destruction of Magdeburg by Tilly’s men, but he defeated them in the battle of Breitenfeld in 1631. 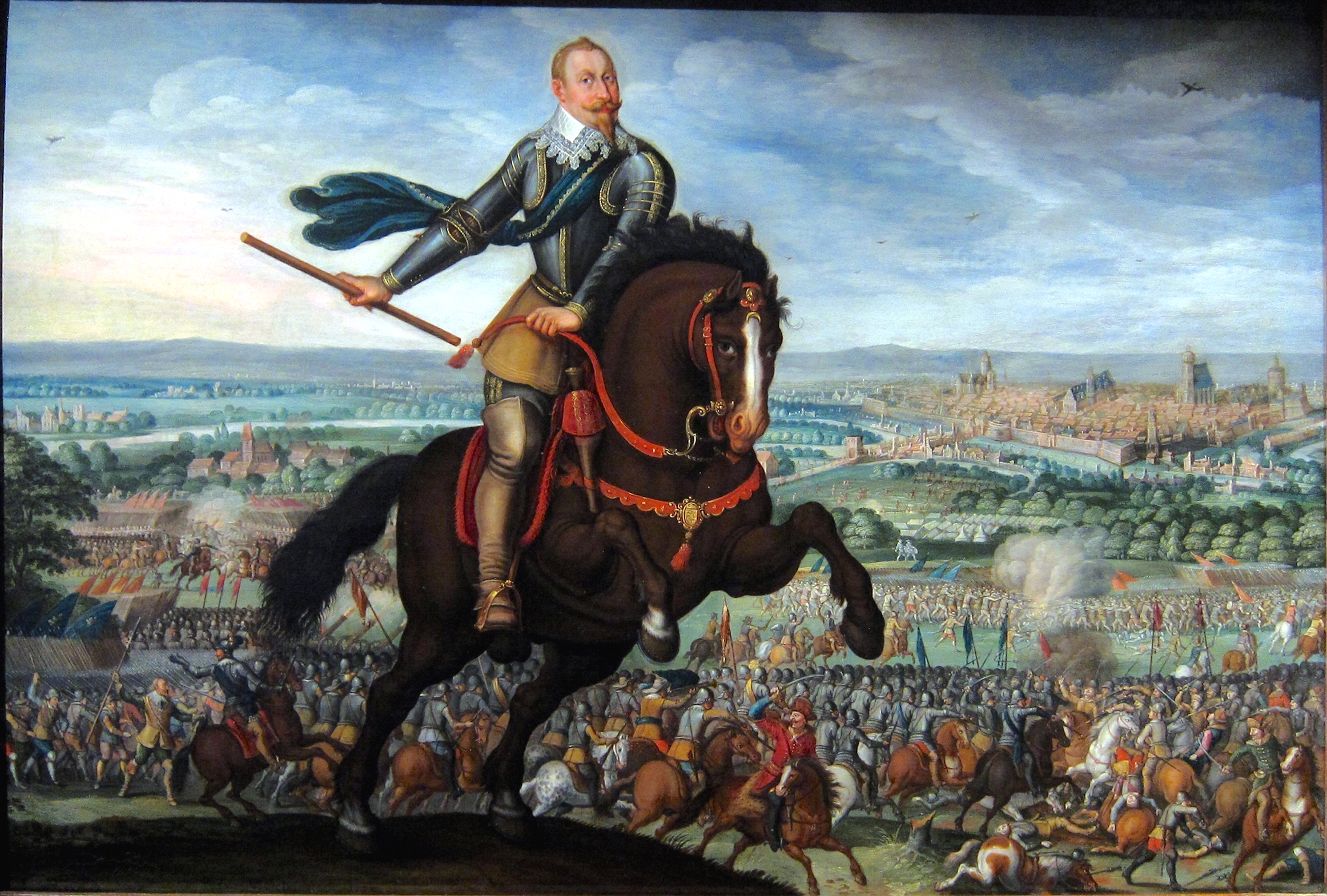 Alarmed by Swedish successes, Ferdinand recalled Wallenstein in 1632, making him nearly a dictator of Germany. In the battle of Lützen that same year, Gustavus was killed and the Swedish advances were checked. But the fighting went on. Wallenstein was assassinated in 1634 .

At this point France, under the guidance of Cardinal Richelieu, entered the war on the Protestant side in a political rather than religious move. Richelieu saw a chance to defeat the Spanish and Austrian Hapsburgs. He sent troops under Turenne and Condé, and the tide turned against Ferdinand.

For the next 14 years fighting by French, Spanish, Swedish, and German troops went on in Germany, Italy, Flanders, and the Pyrenees. In 1648 Ferdinand III, who had succeeded his father, saw that  war was useless and signed the Peace of Westphalia. 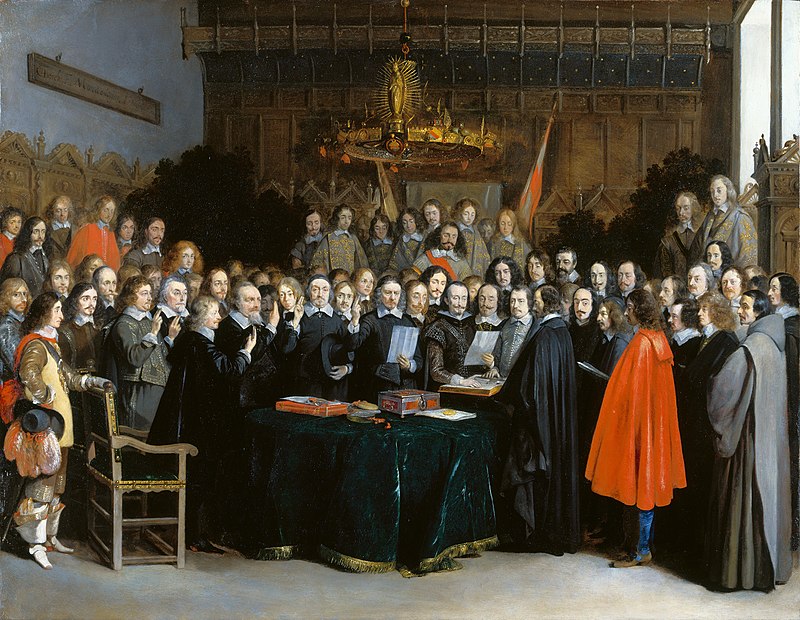 The war reduced the population of Germany by more than half. Education and agriculture were halted. There were not enough people left to rebuild and to replant. Religious unity was not established.

As a result of the war Spain, by the separate Treaty of Münster, recognized the independence of the Netherlands. Sweden obtained territories on the German coasts of the Baltic and North seas. France acquired Alsace. Cardinal Richelieu had laid the foundation for the French domination of Europe.