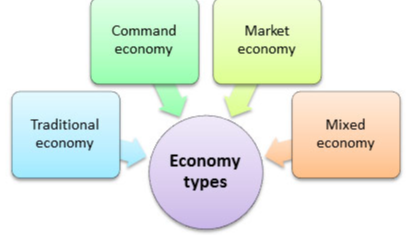 Each nation and society thus must make decisions based on their own values. The different way societies arrange their econonomies are called economic systems.

Economic systems are divided up into three basic types. These types are:

A traditional economic system is one in which people’s economic roles are the same as those of their parents and grandparents. Societies that produce goods and services in traditional ways are found today in some parts of South America, Asia, and Africa. There, people living in an agricultural village still plant and harvest their own food on their own land. And the ways they produce clothing are almost exactly the same as those used in the past. Tradition and customs decide what these people do for a living and how their work is performed.

A market economic system is one in which a nation’s economic decisions are the result of individual decisions by buyers and sellers in the marketplace. The U.S. and many European countries have a market economic system. When you finish school, you may go to work where you choose, if a job is open. You are also free to go into business on your own. Suppose that you decide to open a business. You will risk the money that you have saved or borrowed in the hope that you will be successful.  The success that you have will depend on the demand by consumers for your goods.

WHO OWNS THE MEANS OF PRODUCTION IN ECONOMIC SYSTEMS

If the government owns and operates almost all of the nation’s means of production, then that nation’s economic system is called communism. China has a communist economic system. Almost all of the means of production are publicly owned-that is, owned by the government. Government planners decide the basic economic questions. Farming on private plots of land is sometimes allowed. In recent years, the Chinese government has been allowing more and more private businesses to operate.

If the government owns and operates many of the nation’s major industries-such as banks, airlines, railroads, and power plants-but allows individuals to own other businesses, including stores, farms, and factories, that nation’s economic system is called socialism.

Sweden is an example of a country whose economic system is often described as socialist. Most of its major industries, such as coal mining, electric power, gas, telephone, and railroads, are owned by the government. Under Sweden’s national health insurance system, the people receive free medical services all their lives.

In Spain as well as in USA, as in most capitalist countries, there are many examples of government ownership. Public colleges, high schools, and elementary schools, for example, are owned and operated by state or local governments. Other publicly owned enterprises are the postal service, many municipal bus lines and trains, a few electric power plants, and housing projects.