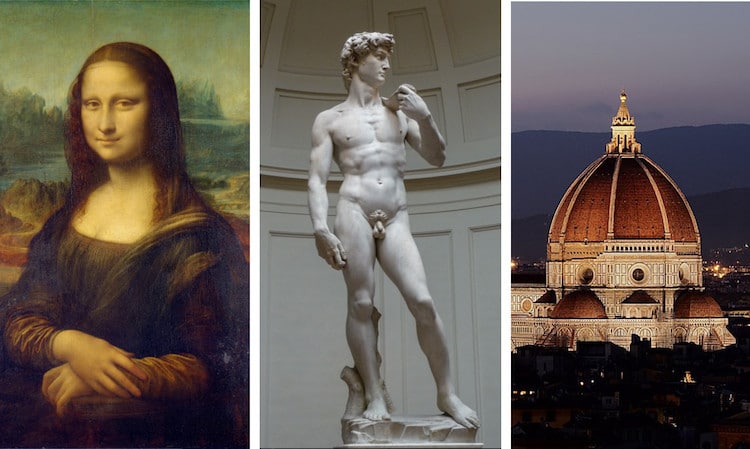 The Renaissance was a period of time from the 14th to the 17th century in Europe. This era bridged the time between the Middle Ages and modern times. The word “Renaissance” means “rebirth”.

Renaissance is a consequence of the humanism and it appeared in Italy. Artists were supported by patrons to produce their works. The main patrons were the Medici family in Florence, the Sforza in Milan and the Popes in Rome (mainly Alexander VI, Julius II and Leo X)
The Renaissance  was a rebirth of education, science, art, literature, music, and a better life for people in general. The Renaissance was a revival of Classical Greek and Roman Culture. The two facts that contributed to this revival were:

The Renaissance was centered in Italy during the 1300s, before spreading throughout Europe in the 1500 and 1600s.

Stages of the Renaissance.
The Renaissance started in Florence, Italy and spread to other city-states in Italy. Part of the reason it began in Italy was because of the history of Rome and the Roman Empire. Another reason it began in Italy was because Italy had become very wealthy and the wealthy families were willing to spend their money supporting artists and geniuses.
City-states played a big role in the rule of Italy at the time. They were often ruled by a powerful family. Some important city-states included Florence, Milan, Venice, and Ferrara.
The most important stages in the Renaissance were:

1    QUATTROCENTO  developed in the 15th century in Florence. The new concepts and innovations were based on the ideas of harmony and proportion. Brunelleschi and Alberti renewed architecture; Ghiberti and Donatello gave classical proportions to their sculptures while Masaccio, Fra Agelico and Botticelli were considered the  most important painters.

2    CINQUECENTO took place in the 16th century. Rome became the most important artistic centre and Popes were the main patrons. Michelangelo, Leonardo da Vinci and Raphael Sanzio were the most relevant artists. However, a new school of painting (Venetian school) emerged in Venice and its most important painters were Giorgione and Titian.

Facts about the Renaissance